The Music Box Village in New Orleans is open for the spring season, including the house that Alyssa Dennis and I made (pictured above). Check their site for hours and concert schedules: musicboxvillage.com

Packaged up yesterday’s whisperer with touch sensors in a broken down toy ukulele. Video from a quick live demo at Wordhack, at Babycastles NYC. 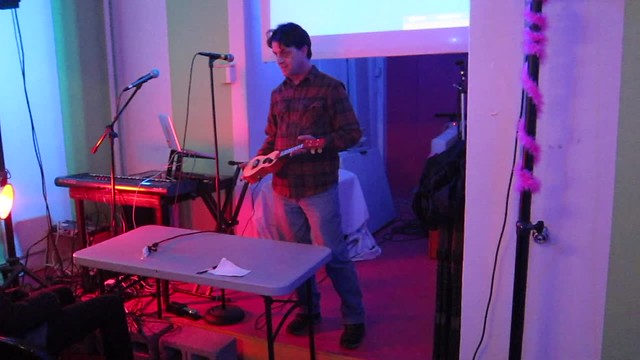 Instrument-a-day is back! This is my ninth year of making a new musical instrument (loosely defined) every day in February.

An easy one for day one: I tied a piece of fishing line to a battery-powered cappuccino frother to make a strumming machine. 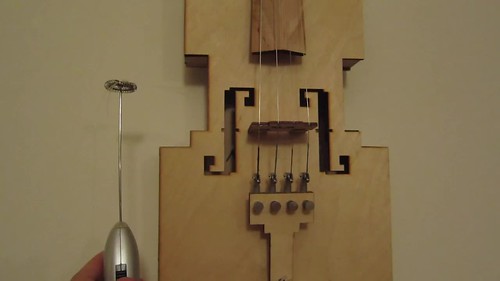 For Bloomsday I made a little web machine which reads out random lines of dialog from James Joyce’s Ulysses. Leave it running all day.

It’s random but global, so everyone listening will hear the same texts at the same time.

(It seems to work best in OSX Safari, where it can find an Irish accent. In Chrome it sometimes freezes up.)

And some text-twisting, looking for accidental pentameter and accidental acronyms in the text of Ulysses:

I am another now and yet the same.
About a million barrels all the same.
He cried above the clatter of the wheels:
My boots were creaking I remember now.

The carriage galloped round a corner: stopped.
She was entitled to her widow’s dower
Think you’re the only pebble on the beach?
All that Italian florid music is.

Door of the stables near Cecilia street.
She had a gorgeous, simply gorgeous, time.
It was exactly seventeen o’clock.
Four winners yesterday and three today.

(A rocket rushes up the sky and bursts.
says is the book sensation of the year.
LYNCH: (Lifting Kitty from the table) Come!
Yet I’ve a sort a Yorkshire relish for…

Light goes past the waving cat and bounces off the shiny spinning wheel to the sensor. I cut holes in the wheel to approximate a major scale in just intonation.

It works better with light passing through the holes, but the reflection is more fun.

all the parts in the kit

END_OF_DOCUMENT_TOKEN_TO_BE_REPLACED

Terry Dame’s Weird Wednesdays – on Thursday!  Terry’s wonderful monthly series of odd and fantastic music has moved to Thursday, and I’ll be joining her today, Thursday Feb 27 at 8pm, at Barbès in Park Slope, Brooklyn, with special guest Margaret Leng Tan.  Margaret and I will show our latest collaboration – I’ve taken some of her amazing METROGRAND sculptures, tiny grand pianos each made by cutting and folding a single Metrocard subway pass, and added tiny sound synthesizers to them to make them into playable instruments.  And we’ll have selections from John Cage’s Indeterminacy, played on Speak-and-Play, my speech synthesizer for pianists.  Plus, I’ll show and try to play a bunch of instruments and failed instruments from my Instrument-a-Day project, and my little toy dog will perform Short Ride in a Fast Chihuahua, a new piece with 60 compositions contributed by 16 composers, each piece just 4 seconds long.  BUT THAT’S NOT ALL!  Terry Dame will play on her invented instruments, the Horn of Plenty Sounds and the Parisian Hammer.  All this for a suggested donation of $10, tomorrow night at Barbès, 376 9th Street (corner of 6th Av & 9th St) in Brooklyn!  Here’s the facebook event if you’re into that sort of thing.

Also! Exquisite Contraption opens at Flux Factory on Thursday.  I’ve joined the mad geniuses of Flux Factory in putting together a giant chain reaction machine that threads through their entire building.  The show opens at 6pm, so in theory you could go see the contraption and still make it back to Brooklyn for Weird Wednesday!  But I won’t hold it against you if you don’t. Will the big ramshackle collaborative machine work? Will it turn against its masters?  Go and find out!  If you can’t make the opening, you can see the contraption almost any time by appointment.  That’s 6pm at Flux Factory, 39-31 29th Street, Long Island City, Queens NY.  Of course there’s a facebook event for this too.

@pentametron, my twitter sonnet mining machine, has written its first novel, all in verse, for NaNoGenMo. You can read I got an alligator for a pet at pentametron.com.

Fred Durieu, one of the artists on the Concert Hall installation in Paris, made this wonderful virtual tour of our monstrous creation.

Today (Thursday May 9) is the last day to see my installation Singing Room for a Shy Person at Clocktower Gallery in Manhattan. Your next chance to see it will probably be at the Tinguely Museum in Switzerland this Fall.

Singing Room was made possible by the Metamatic Research Initiative.